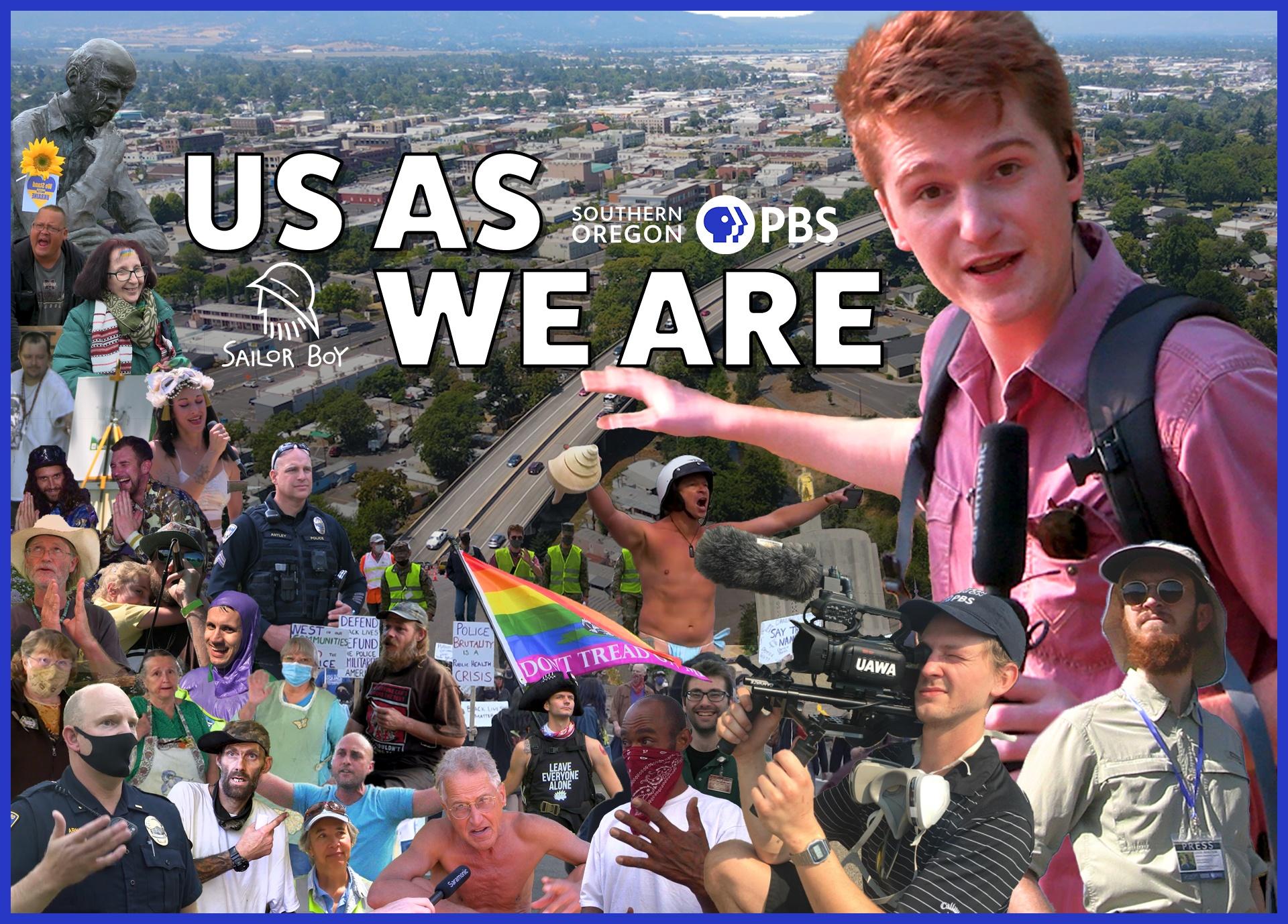 In this episode of Us As We Are, we find ourselves in Medford's Vogel Plaza, where residents gathered to hold a rally in solidarity with Ukraine as it faces invasion by Russian forces.

We attend the 14th annual Southern Oregon Polar Plunge, put on by Special Olympics Oregon to raise money in support of their special-needs athletes. We talk to the organizers of the event, the athletes who benefit from the fundraising, as well as some of the brave people willing to hop into ice-cold water to support the cause.

We head to Ashland's Downtown Plaza to attend the city's annual MLK Day celebration, where we hear some wise words about social justice from Mayor Julie Akins, DL Richardson of the Black Southern Oregon Alliance, and Dr. Geneva Craig, who marched with Dr. King during the heat of the civil rights movement in the American South.

Ep 26: Us As We Are: A Retrospective Special Episode

Us As We Are Special

In this retrospective documentary, we look back on a few of the biggest stories.

Wandering around Pear Blossom Park during Medford's annual Winter Lights Festival, which was held as an in-person gathering this year after being done as a COVID-safe drive-through in 2020. Hosted by Medford's City Manager and organized by the Parks and Recreation department, this event features a candy cane hunt, the South Medford HS marching band, Santa, fireworks, and a Christmas tree lighting.

We attend the opening night of Ashland's Rotary Club Ice Skating Rink to talk to locals.

We attend a close-knit gathering at local venue Johnny B's where local artists and musicians come to jam, dance and paint along with an all night set of "head oscillation music," featuring Chorasynth, CROMULON, and DJ Nykon.

We visit the small unincorporated community of Rocky Point, OR, which this fall held its 20th annual Fall Festival. Put on by the Rocky Point Quilt Guild, the festival includes a bazaar featuring a wide array of hand-made items, as well as a raffle to win a large quilt made by the guild. All proceeds from this event go to supporting the Rocky Point Fire Department.

The Hearth storytelling group created a commemorative 8 mile walk about the Almeda Fire.

A follow up video regarding T Bone's camp on the Bear Creek Greenbelt as local law enforcement came in to uphold the area's camping ban.

Meet T Bone, a homeless individual living on the Bear Creek Greenway, who shows off his camp and explains the realities of living with police enforcement of anti-camping laws. The day after this interview was shot, police conducted a sweep of nearby homeless camps - footage which will be featured in a follow-up to this video.

The Us As We Are crew visits Klamath Falls to meet up with a group called Peoples Rights of Oregon, who have set up an encampment at the head waters of Canal A of the Klamath Irrigation System to protest recent water restrictions placed to offset a predicted drought.

Ep. 15: Chalk It Up for Endangered Species

Visit to the Phoenix Civic Center in Phoenix, Ore., for the inaugural Chalk It Up event, which was put on to create awareness for the thousands of species of plants, animals and insects that are currently endangered while using chalk art to bring the community together.

Keegan Van Hook interviews people in support of Ashland's proposed Racial and Social Equity Commission at a rally in Ashland.

A look behind-the-scenes at the FEMA Vaccination Center set up at the Jackson County Expo Center. This episode ends with host Keegan Van Hook receiving the vaccine.

Conversations with members of the homeless community and service workers after the passing of Medford's anti-camping ordinance.

Conversations with protesters in Ashland who oppose what the majority of society believes about COVID-19, masks, and vaccines.

As winter sets in with very little shelter for those living on the streets, Joseph Gibson, a man who is homeless by choice, or "homefree," sets up a tent in the Ashland Downtown Plaza with other homeless activists to call attention to the lack of shelter and alleged unfair treatment from the police.

Nearly 2 months after the Almeda Fire, the cleanup of Talent and Phoenix is underway. In this episode we visit the Medford Estates trailer park, where a team of contractors is hard at work clearing the debris and rebuilding new affordable housing.

On Veteran’s Day 2020, most parades and large celebratory events were canceled due to COVID-19. However, in Eagle Point, a group of veteran motorcycle and sports car enthusiasts took matters into their own hands, holding a ride-through of their local community.

During the tense evening of the national election, program host Keegan Van Hook attempts to strike up conversations about local affairs...and is rejected by nearly everyone he meets.

In the midst of clean up efforts after the Almeda Fire, Lowes of Medford steps up to offer the community cleaning supplies and tools contained in a useful blue bucket.

A conversation with Pastor Lee Gregory, a man who relocated to the Rogue Valley after he lost everything in 2018’s Paradise Fire, discussing his reaction to the Almeda Fire.

Dylan Wandler, Talent resident and Almeda Fire survivor, discusses the day the fire struck and what evacuating was like for his family.

Petra Angula, Talent resident and Almeda Fire survivor, discusses the emotions of losing her home in to fire, and how the community is united together to help one another.

Branch Shiveley, North Ashland Resident and Almeda Fire survivor, discusses his experience with being evacuated from the fire and how he plans to rebuild in the future.

Keegan Van Hook is a documentary filmmaker from Portland, OR, now living in Ashland. He started with documentary film making while exploring Oregon with longtime friend Louis Bengtson, resulting in the educational travel-adventure series, "Keegan & Louis Adventures." After leaving Southern Oregon University before the beginning of the COVID-19 pandemic, he began producing episodes of "Us As We Are" with friends Tripp White and Miles Treece, as Sailor Boy Media. Keegan takes his inspiration from Huell Howser, Jacques Cousteau, and the American space program. In the future, Keegan would like to produce more science documentaries and currently does so with "Crossed Signals," a show on YouTube which explores notions of cosmic existence and our relationship with the larger universe. Keegan currently works as Master Control Operator and Media Asset Coordinator at Southern Oregon PBS.