Crater Lake: The Mirror of Heaven

This glorious, high-definition documentary explores one of the most beautiful lakes in the world, Southern Oregon’s magnificent Crater Lake. Capturing the breathtaking scope of the lake and its surrounding area, the film details the lake’s formation by a massive volcanic eruption approximately 7,700 years ago. It also explores Crater Lake’s prominence in Klamath and Modoc Native American history and culture and the lifelong struggle of William Gladstone Steel, Crater Lake’s biggest supporter, to have it designated as a National Park in 1902, allowing its pristine splendor to be preserved for generations to come. Using historical re-enactments, rare vintage lantern slides, and sophisticated computer animation, Mirror of Heaven is an awe-inspiring witness to Crater Lake’s fascinating past and present.

On November 18, 2004 at 8:30 p.m. on Channel 8, Southern Oregon PBS (then Southern Oregon Public Television) made television history. Our original half-hour documentary, CRATER LAKE: The Mirror of Heaven, is a first in two ways: 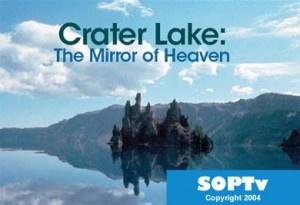 “This film is an amazing accomplishment for us,” says Greg Frederick, Executive Producer and longtime SO PBS associate. “The story of Crater Lake is fascinating in itself, weaving together the chronicles of Native Americans and European settlers, with a truly gripping race through the politics of conservation at the turn of the century. And to be able to tell the story of Crater Lake in crystal-clear, high-definition cinematography is the icing on the cake, a real coup for a small station like ours.”

With the cost of a high-definition camera running at around $200,000, SO PBS could not have done the filming without help from our larger and more well-funded sister broadcaster in Portland, Oregon Public Broadcasting. The existence of a state-of-the-art digital editing facility at COBI in Medford, one of the first on the entire West Coast, helped everything come together.

More About the Program

The familiar voice of local commentator Russell Sadler keeps the narrative moving, beginning with the explosion of ancient Mt. Mazama. Through myth and through scientific 3-D animation, the formation of what we now call Crater Lake comes to life, in all its volcanic glory. Was it a temper tantrum of Llao, the Modoc chief of the underworld, that caused the destruction, or was it the intolerable pressure of deep changes in the earth’s core that brought molten lava bursting through thousands of feet of granite? The film presents both interpretations, painstakingly detailed.

With no written accounts from the Klamath/Modoc tribe, writer John Darling and producers Frederick and Cynthia Salbato augmented tribal oral history with letters and accounts from other European American explorers. Whether Native Americans made pilgrimages to Crater Lake or stayed away from it in fear is debatable, but they definitely regarded the area as sacred.

The first records of Europeans seeing the lake come from a somewhat comical group of would-be treasure hunters whose greed led them off the beaten path. Starving and disoriented, the leader rode out of the trees and came inches from falling down the incredibly steep bank into the lake itself. He credited his survival to his mule’s stubbornness. Moments later, the group’s troubles temporarily melted away as the stupendous beauty of the lake literally brought the men to their knees.

After that, the lake was secret no more to settlers pouring into the West. Word of it eventually reached the ears of an Iowa farm boy who grew up, moved to Oregon, and became the first to lead an organized party of civilians to its shores. William Gladstone Steel then spent much of the rest of his determined life haunting the offices of state and national politicians, presenting his petitions to protect Crater Lake as a National Park. Logging and mining interests successfully derailed his efforts, even as they reached closer and closer to the White House. It wasn’t until the conservationist, Theodore Roosevelt, was elected to office that a word in the right ear at the right time made all Steel’s efforts succeed.

President Roosevelt signed the bill that created Crater Lake National Park though he never made it there himself. But, amazingly, people from all over the world have flocked to the sealed volcanic crater just to gaze upon the incredible beauty of the place. Before the creation of a good road in the 1950s turned the trip into an easier outing, reaching the lake was nothing less than arduous, involving mile after mile of rutted, steep trails and hair-raising descents. Now we invite all to make the relatively easy trip to the shores and cliffs of Crater Lake to see for themselves the breathtaking beauty that still brings visitors to their knees in awe.